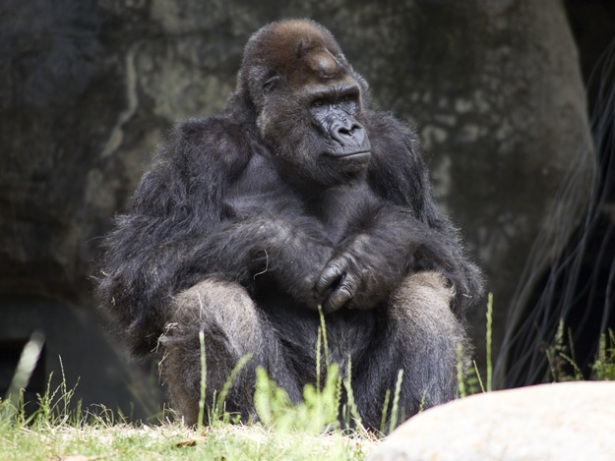 The headline screamed out at me in the middle of yet another zombie-scroll down the vortex better known as Facebook:

Ivan the Gorilla Dead at 50

Slapped out of my stupor, I immediately clicked, eager glean what details I could about the demise of one of my childhood icons.  To be honest, I was actually shocked to learn that–until at least just hours before–the old beast lived.  I could swear that he had shuffled off long ago, but I have been wrong about these things before. Contrary to my recent drunken insistence, Peter O’Toole lives and breathes, and Abe Vigoda–believe it or not–still walks the Earth. Or rolls. Or perhaps just lays there, but you get my point.

For those of you who didn’t grow up in the 70’s and 80’s Pacific Northwest, Ivan the Gorilla wasn’t just a gorilla, he was our gorilla. He was snatched from the wild in west Africa  in 1964, as part of a promotional scheme hatched by shopping center owner Earl Irwin. He was haphazardly transported to America, where he became the centerpiece attraction at the B&I, a bizarre circus-themed department/we-have-everything store located in Tacoma, Washington.  That’s right: the store had its own gorilla living in a compound in the middle of the place, complete with pedestrian ramp and smudged-up viewing windows.  There a forlorn and solitary Ivan would swing on his tire and gaze back at the clusters of enthralled shoppers who screeched in disbelief and banged on the glass. King Kong comes to the shabby suburbs.

I remember the first time I saw Ivan.  I was horrified.  My mother dragged me screaming to his lair  She held my convulsing body up to the window for a view. She loved Ivan and had known the couple who raised him as an infant; she always relished seeing the ape.  But I was a four year-old-boy and was convinced that Ivan the Gorilla was going to smash through the glass, snatch me away and rip the flesh from my bones with his sharp, gorilla canines.  After all, this was the scenario planted in my head by my older brother, who relished in such psychological torture.

Over the years my fear of Ivan waned, and the B&I  became one of my favorite destinations.  The place was a sprawling complex offering sporting goods, clothes, housewares, toys, and an array of semi-exotic pets not available at other stores.  In addition to Ivan, the place also contained a few flamingos, some seals, and best of all,  a tic-tac-toe playing chicken.  That’s right: there was a machine containing a live chicken that, for a mere 25 cents, would play and usually beat you in tic-tac-toe.  Craziness.

Going to the B&I was much more than a shopping excursion.  It was part adventure and pure entertainment. In keeping with the circus theme, the store contained a massive carousel, along with a huge concourse of pinball machines.  By the early-80’s this arcade had expanded into one of the largest collections of video games in the Northwest: PacMan, Frogger, Galaga, Joust!, Asteroids Deluxe—the B&I had it all..  And then, not to rest on their laurels, the owners punched a hole in the roof and constructed their very own WATER SLIDE (holy fuck).  Nothing was unthinkable.  There were no focus groups or regulations, just imagination and a desire to make a buck through entertainment. There was always something new.

The B&I was Tacoma incarnate: It was a raggedy working class diversion without an  iota of pretensiousness.  All the goods were discount and cheap and all the food was junk.  The place reeked of popcorn, wood chips, and animal piss.  Like Yardbirds in Olympia and Chehalis, it was the old Northwest, a place where the families of truck drivers, loggers, and mill workers could stretch their buck to the maximum.  This was the pre-Starbucks/Microsoft era, when the region was decidedly less well-off and people kept their noses closer to the ground.

At one point I stopped going to the B&I.  This coincided with the time when I stopped going to Tacoma all together, save to pass through on the way to her much more seductive sister to the north.  In my youthful wisdom I had wised-up and figured out just how tired and sad anything to do with Tacoma was.  Even though my whole family hailed from there—it’s where I was born—I avoided it like a pile of dogshit on the lawn.  I, for one, was moving on and never looking back, store-bound gorillas be damned.

It seems that I wasn’t the only one whose interest in the B&I ebbed.  The owner went through bankruptcy in the early 90’s, victim to changing tastes and perhaps overly-ambitious additions to the store.  After all, a fully-functioning waterslide ain’t cheap to operate.  And something had happened with the public as well.  A captive gorilla may have been a novelty in the 70’s, but increasing awareness about the plight of the great apes, caged and wild, led to a campaign to get Ivan out of his pathetic concrete enclosure. After much cajoling and legal wrangling—including nearly being sent off to Michael Jackson’s Neverland Ranch—Ivan was transferred to the Atlanta Zoo in 1993, after 27 years in the B&I. He lived his last 18 years there in relative happiness, spending his time in a much larger and more natural enclosure, in the company of other gorillas.

When I was a kid, the B&I was a normal store.  I didn’t really know any differently.  Of course shopping centers have gorillas and carousels and tic-tac-toe chickens.  It wasn’t until a few years back–when drinking whisky with my friend John from Tacoma–that I realized just how weird the place was.  We both howled in Jameson-fueled laughter about the sheer absurdity of this site that we loved as kids.

“Whatever happened to Ivan?” I asked.

“I don’t know.  I think maybe he died,” shrugged John.

The old B&I building is still standing, though it’s now been converted into a “public market” with a distinctly ghetto vibe, or so I’ve read.  The new tenants hawk gold teeth grills, smokes, hair weaves, and shirts proclaiming Filipino and Chamorro pride.  There are no more animals, save the pet shop, which one internet commenter wanted to “firebomb” out of mercy to the critters, and the waterslide is long gone.  But the carousel is said to still exist, and the note taped to its chained-up entrance lets customers know that they still fire if up from time to time.  I really hope so.  Next time I’m home I want to head up to Tacoma and ride the it, for old time’s sake.

9 thoughts on “DEATH OF A GORILLA”